In its replies to two RTIs, filed separately by a DUSU office bearer and Academic Council member from DTF, Dr. Amitav Chakraborty, for information on the “Budget Head” under which funds were spent in purchasing laptops for FYUP students, Delhi University has admitted that money was diverted from the “OBC Grant for University Departments” and “OBC Grant for Colleges.” [To download application and reply, see the end of the page.] 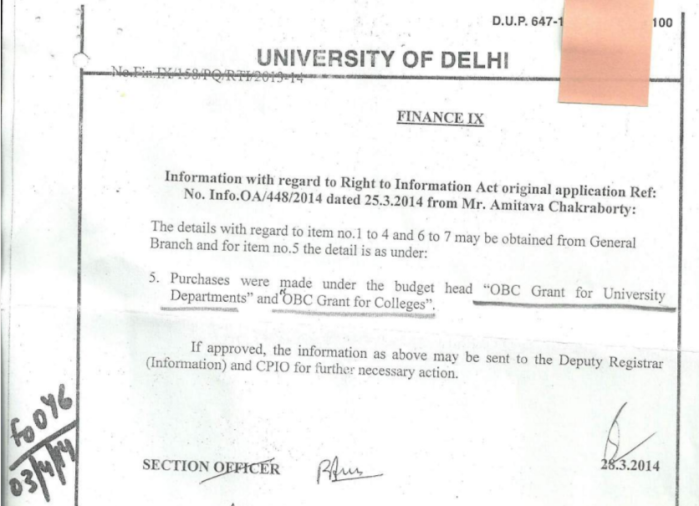 62,600 laptops have been purchased using money that came to the University in 2008, under a tagged grant exclusively meant for expansion of physical infrastructure in colleges and departments to cater to the increased student-intake following the OBC Reservations. The cost of each laptop as displayed on the boxes was Rs. 27565.50.

While the Government’s Directive on the use of the two OBC Grants is clear and does not allow the University to use its own discretion thereof, this diversion amounts to a misappropriation that reveals the basis of the infrastructure problem plaguing colleges and departments during the introduction of the FYUP. Construction of IT-enabled large-sized classrooms, extra Science laboratories and lab equipment, Computer Labs, furniture and faculty rooms – all these were supposed to be accomplished as part of the required infrastructure, through the OBC grants. After six years, these needs still remain a pipedream as all colleges and departments face acute infrastructural and space shortages. It is criminal to have denied the legitimate utilization of these funds and instead, to spend them in the contentious purchase of laptops for an exclusive batch of students.

The Democratic Teachers’ Front (DTF) underlines the fact that the decision to source the funds for laptops from the OBC Grants head was done in a clandestine manner by throwing all norms of transparency to the winds. Recently, the Executive Council had met to approve of the accounts for the last financial year but its members were not even informed about the specifics when EC Member Abha Dev Habib had enquired about them. The DTF demands that in the wake of these significant revelations, an independent inquiry be set up by the Central Government to probe into something that prima facie amounts to a major financial irregularity and violation of the Government’s Directive.