Delhi University teachers today began a four-day strike to protest against the government’s inaction over their long-pending demands, which include setting up of a UGC pay review committee and raising their superannuation age to 65 years. Hundreds of teachers affiliated to the Delhi University Teachers’ Association (DUTA) staged a demonstration outside the Ministry of Human Resource Development … 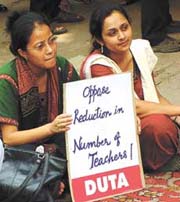 Over a thousand teachers collected outside the UGC today as the Delhi University Teachers’ Association observed a strike and a dharna, to demand the withdrawal of two UGC circulars that seek to increase the teachers’ workload and reduce their numbers. 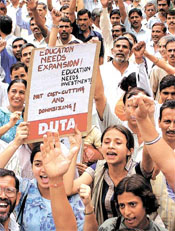 They are also opposing the UGC directive to increase workload to 22 hours which would mean a decline in the quality of teaching and drastic job losses.

Teachers, students and karamcharis of Delhi University march to the UGC office in the Capital on September 11, 2002.

to the Executive Council

to the Academic Council